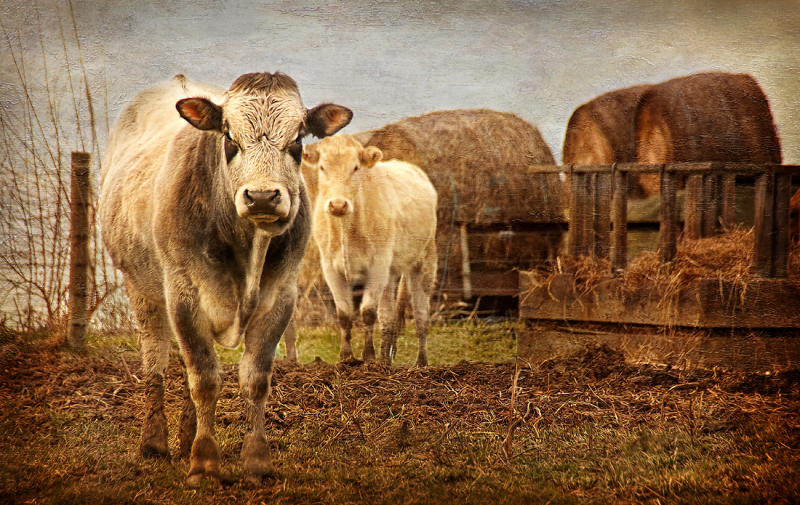 Previous Next
← previous day next day →

These are some of our neighbor's pasture grazed cattle. John raises them for meat and sells they by the whole, half or quarter steer. Not organic, but meat from animals that are treated well. John and his family are making it, barely, as a full-time farmers on a small farm that has been in John's family for several generations.

I have been INTERVIEWED three times by photo-buddies:
Artist Connection .
PHOTOGENERALIST
DAILY PRACTICE

Oh...I love these cows!!! There is something about their faces - so soft..so gentle..so very sweet. And - I especially like the composition with the hay bales (are they hay bales?) filling the frame and adding context and balance.

@Marcie: Thanks, Marcie. :-) Yes, they are hay bales--big round ones seem to be popular around here--they can easily be moved with a tractor.

@Lydia.Dd: Thank you for visiting and commenting. :-)

i really love you processing of the images...... they create a different mood altogether.... and this one is very well framed.....

@Lokesh: Thank you. Textures are fun to play with. :-)

@Vert Pomme: Thank you! I enjoy seeing the cows every day.

Marcia and I love all things flowers, rabbits, and cows. A lovely portrait Anita and a great use of texture.
http://lefeverphotoblog.com/

What a beautifully composed shot, Anita. You caught the cows in a perfect pose. Great feel to this. The Fort Worth Stock Show and Rodeo is going on now and yesterday the kids auctioned off their prize steers to earn money for scholarships. Times are hard for ranchers everywhere, but it is so wonderful to see the public support these kids and their families. The Stock Show here is one of the tops in the country in raising money for kids to go to school.

i just love the clarity of this image you captured here.. even more so with the textured look.. :)

@Paul: Thank you for visiting and commenting!

This is fantastic ~ beautiful colors, textures and composition. A great mood of the farm!

The texture becomes so much part of the scene y'd think it was there on the day - and certified organic !

A beautiful and really well composed rural scene. Light and tones are splendid, and so is your post-processing!

They're beautiful cattle. The work you've done brings the cow on the left right out to meet us, almost 3D, and the overall effect is one of an old painting, which I like. 4stars. ;OD

@janina: Thank you for commenting. I'm glad you like it.

A wonderful depiction of a pastoral scene that many of us do not see in person anymore.

@Julie L. Brown: Thank you, Julie. I am fortunate to see this scene every day. :-)

@oncho: Thank you for visiting and commenting. :-)

Nicely done, Anita. You just keep getting better with these textures.

Oh, I like this one very much! The processing is terrific!

Fantastic post processing. I love the cow's expression and the way you have composed this shot.

Fantastic! Love the texture and processing.

Jim from Fort Worth, United States

The post processing is superb. One has to love the life of farming and ranching to do it. There's not a lot of financial gain but a lot of satisfaction. There's something to be said for that.